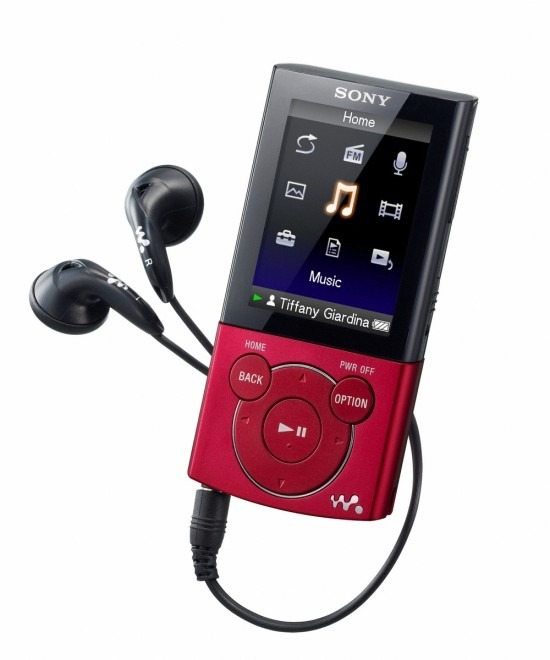 The Sony Walkman E-series is available in the 4GB and 8GB versions but not in the 16 GB model. All the models of the Walkman E-Series from Sony have a standard design which makes it very familiar to operate.

The Walkman E-Series has a 2” screen and below this are placed the main playback controls.  This consists of a five-way control pad, an option key which can be used to bring the other contextual menus and a backhome button.  A volume rocker is present on the right spine which acts as a hold switch.  At the bottom of the Sony Walkman E-series is the usual 3.5 mm headphone jack and a USB port which is proprietary.  It measures about 3.2” in height and 1.7” wide with a depth of 0.3” hence it is very pocket friendly and compact in size.

The walkman E-series is available in many colors like black, pink, red and also in blue which is available in 4GB only. The main menu of the Walkman E-Series from Sony has all the icons for the player’s main functions.  Speedy navigation is possible as the tracks are separated into sections from A to B, C to E and so on.  Browsing is also possible by Album art which can be magnified. It is very easy to get the music on to your Walkman E-Series as it is compatible with many jukeboxes like Windows Media Player and Rhapsody.  Additionally, this Walkman E-Series from Soy has a Sony Content Transfer application which makes it very easy to just drag and drop either from the iTunes interface or from your hard drive.

The Walkman E-Series supports WMA, MP3, unprotected AAC and LPCM audio.  It is also equipped with the Rhapsody DNA for enabling transfers easily.  It can also play photos with JPEG and video with conversion required for the latter.  You can purchase or rent videos from Amazon Video On Demand as the Sony Walkman E-series supports it as well.  You can also tune into the integrated FM radio with 30 fixed slots and an auto scan facility.

The Sony Walkman E-Series is very reasonably priced and is compact and user friendly with many desirable features incorporated in it.  The sound quality is great and the battery life is also excellent.

The Sony Walkman E-Series has a maximum memory of 8 GB and does not allow memory expansion. Additionally, it does not support podcasts. The Sony E-Series Walkman provides great value for money and is a great option for those looking for an MP3 player which is pocket friendly and having handy features.